By Paul Scapicchio
with help from Kathy and Philip Carangelo 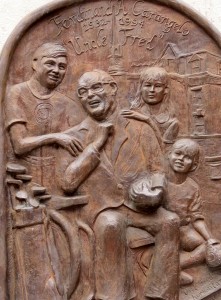 As a child, I knew about Uncle Fred mostly through others.   My Uncle Bill Faria had grown up with Uncle Fred, and had gone to Caddy Camp with him. While I knew of him, I didn’t really know him until 1976 when Clausen’s Caddy Camp Closed and Uncle Fred’s son Philip came to Oyster Harbors. Up until that time, Uncle Fred, was not my uncle. He was uncle to our rivals at Clausen’s.

During that summer, Phil and I became close and carried our friendship back to the North End where we lived a block away from each other. While I spent a great deal of time with my new best friend, I also spent time with Uncle Fred and it affected me profoundly.

Whenever I wandered down Harris Street to call Phil, Uncle Fred, seated in his wheelchair would have me sit with him and talk for 5 or 10 minutes while I waited. Like most adults, he would ask questions about school and family. Unlike other adults however, Uncle Fred listened with great intensity.   When I came back the next day he would remember our discussions and would pick up the conversation. “How did you make out on that test?“ “Are you going to try out for the golf team?” or “Did you tell your uncle Bill I was asking for him?” He treated me as someone he respected and wanted to hear from and I quickly came to trust him and look forward to our conversations.

While the ravages of Muscular Dystrophy weakened his muscles and limited his mobility, it never defined Uncle Fred. His boundless energy and enthusiasm for the community he loved did. As a young man he studied accounting to learn a skill, which wouldn’t require physical exertion and became a bookkeeper at North Bennett Street Industrial School. It was there that he began to see and understand his true calling.

Young men and women gravitated towards him because he was easy to talk to. He listened to them and seemed to understand better than anyone who they were and what they were dealing with as they grew. He went back to school at UMass Boston and eventually earned a degree in social work.   He put that degree to work when he started the afterschool program that came to be known as teen lounge, at the North Bennett Street School. The program was open to both boys and girls, which at the time was groundbreaking. He took over the directorship of the Lake Tarleton Caddy Camp and when Lake Tarleton closed, he took his wife and five children with him to Clausen’s.

When the scourge of heroin hit the North End in the mid 1970s leaving families and the community just about broken, Uncle Fred sought out those most in danger and funneled their energy into sports and activities. He started a golf team at Christopher Columbus High School; he enrolled kids in camps like the Wayne Embry Basketball Camp. He coached every sport imaginable and sent kids across the city to George Wright Golf Course for rounds of free golf. When uncle Fred was not coaching, he would take his wheelchair and accompanied by one of his sons would drive the streets of the North End, invariably ending up behind the backstop of the Babe Ruth field watching baseball, cheering on his surrogate nieces and nephews and talking with their families

His daughter Kathy put it this way “My dad wanted to help those who needed it most. He just always loved the underdog.” In talking to Phil Carangelo, a story came to mind that summed up the man for his son.   “My father was coaching a baseball team that I was playing on. During a playoff game my father put our worst player in left field. I complained that he was going to cost us the game.   ‘I would rather play 9 of him than a team of all-stars,’ he shot back. ‘He likes the game and tries his hardest, so I am playing him.’” An inning later: that kid who could never seem to catch a fly ball eaked out the game’s winning hit and a life lesson was learned.

In my early teens, Uncle Fred entered a group of us in the Ponkapoag CYO golf tournament. None of us had played much, but it was a chance to golf for free and to compete. When we arrived, the man at the registration table explained that we needed to qualify for the event and asked for our handicaps. Without missing a beat Uncle Fred told him that while we didn’t have handicaps, we were all accomplished golfers and could easily break 100. (In our group, only Anthony Carangelo and perhaps Phil broke 100). I kicked, threw and shot my way to a 110, but the score was not the point. Uncle Fred was going to find a way to have his boys play no matter what.

He continued to find a way to get his kids involved, tapping Sonny Piazza and others to drive us up to Maplewood for the annual unofficial caddy camp reunion. There we stayed at the Bakerbrook Inn and golfed Bethlehem Golf Course in the morning while Uncle Fred cajoled the pro into letting us play Maplewood for free in the afternoon.

That we are back at Maplewood celebrating all that was special and formative about Caddy Camp; is fitting. What is also fitting is that we remember Uncle Fred, who’s legacy is those camps and the underdogs he helped there and beyond. Thank you Uncle Fred!